The ending of last night’s Game of Thrones was the closest a person can come to watching a horrific event unfold right before their eyes. I was full of disbelief and horror as I witnessed the red wedding and that sinking feeling in my stomach has yet to go away.

Before last night’s episode had gotten underway, I noticed that on the parental warnings screen that proceeds every episode, there was a GV for graphic violence.  Game of Thrones has traditionally been a violent and graphic show, so this immediately struck me as odd that they were giving us a warning I had never seen before.  As the episode progressed I had completely forgotten about this warning but as the conclusion took place, I understood why that warning was there last night. As soon as the band began to play “The Rains of Castamere” on their instruments I knew something was wrong.  That insecure feeling only got worse as the events unfolded and I can honestly say that I have never seen anything before last night that pulled on my emotions and left me with this horrible sinking feeling.  Not one time did I ever think that Walder Frey was capable of doing something like that.  The man was always cruel, disgusting and rude but he always seemed harmless.  I could not have been more wrong in that assumption and now Robb and Catelyn are gone forever.  The murder of Robb’s wife was by far the most gruesome but it was Catelyn’s death that has been haunting me the most.  There was something about the stillness that took place after Catelyn sliced open the former Lady Frey’s throat that made her inevitable execution so chilling.  I can’t believe they murdered Grey Wind as well.  Now there are two of the Stark Direwolves that have been killed because of the Lannisters, I hope that Nymeria isn’t lost forever.  Now would be the perfect time for her to return to Arya’s side.

It’s hard to remember what else happened in last night’s episode but there actually more than just horrific bloodshed.  Well, I guess that’s not true even a little bit.  Jon Snow killed a bunch of wildlings especially the warg but more importantly, when he rode off he left Ygritte behind and she looked absolutely heartbroken and understandably so. Where is Jon going to go, and why didn’t he try and find Brandon and Rickon?  There’s no way he didn’t know Summer and Shaggy Dog when he saw them, and Jon Snow is definitely smart enough to know that their presence can only mean that only two brothers he has left were close by.

I had a feeling Daario Naharis would prove himself to be trustworthy after all, but what I was mostly excited about was that we finally got to see how the unsullied fight!  Grey Worm was magnificent and certainly lived up to my expectations.  I do have to say the final outcome of Daario presenting the flag to Daenerys was surprisingly anticlimactic  and I will be extremely disappointed if that was the last we see of her for the season.

Robb is dead and so is Catelyn!  This has been affecting me all day and I can not get the image out of my head.  The more I think about it, the more I can’t help but feel this was Catelyn’s fault.  She was the one who released Jaime Lannister and started the whole mess with the Karstarks.  Without that whole mess Robb wouldn’t have lost a enormous chunk of his army and none of the red wedding ever would have happened. I guess none of that really matters anymore, and what’s done is done.  After this, I can only imagine what to expect next week.  The bar has certainly been set for the season finale and I have a feeling it will be far from disappointing. 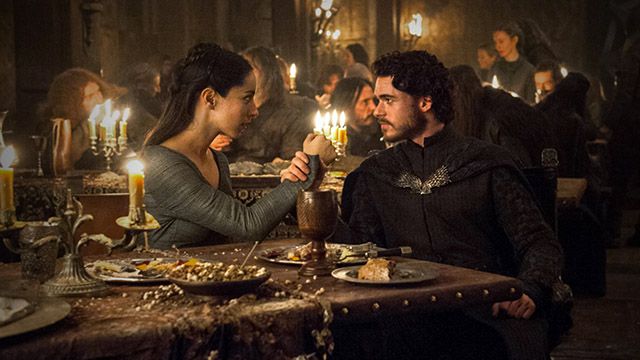