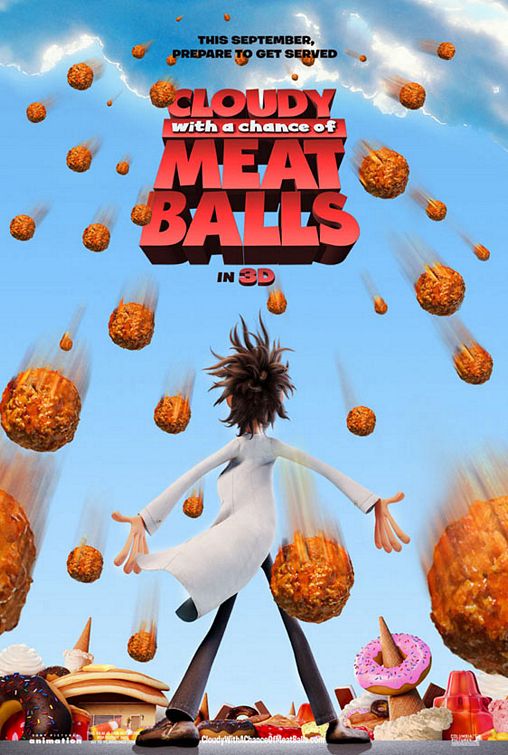 The newest animated tale from Sony Pictures Animation is an entertaining and fun adaptation of Cloudy with a Chance of Meatballs that successfully appeals to all audiences but doesn’t do anything particularly special to launch itself into the upper echelon of animated works, especially this year.
Our story follows Flint Lockwood a loner scientist who has spent his whole life inventing little odds and ends to try and better his life and the worlds. His latest project turns water into any food you can imagine and is built with the hope that it will help his little island town have a variety of food options as they are left with nothing to eat but sardines as their economy struggles after the Sardine company that gave them purpose has shut down. When Flint unleashes the invention onto the world it shoots itself into the atmosphere and begins to cause a weather phenomenon where it rains whatever food Flint transmits to the machine. Giving him a brief bout of popularity the situation soon becomes dire as the fate of his town becomes at stake.
The film is filled with a number of humorous bits throughout and where it really shines are the little side notes and sight gags that might go unnoticed when watching the film. The main plot is rather simple and allows for a few set pieces and a little romance, but it is never terribly compelling and maybe a bit to over the top from time to time. The ridiculousness of it all is part of the film’s charm though and while it is a fun fantasy to play in a couple characters are just a bit too much to handle and blown way over board in their caricature. The police officer and the mayor stand out the most in these instances and quickly become annoying more than anything. I also think Flint himself is a tough character to really fall for and really get behind as his life of being distanced from society and his awkwardness makes it hard for us to connect with him. I understand this is all intentional to lend itself to the arc of the character and there are a number of funny and likable attributes to him, he just definitely won’t be remembered as one of animations great characters anytime soon.
That is not to say Bill Hader doesn’t do a fantastic job in the character, in fact he captures the awkward, weird, and insane aspects of the character perfectly, making Flint a believable character that is just hard to identify with. Anna Faris also does a nice job as Flint’s love interest in the film and doesn’t play the usual ditz that she is fantastic at. The ‘be yourself’ message is strong with her character and I think her story is probably the most identifiable in the picture.
The movie is also a blast to look at and really does a great job at selling us on the chaos and absurdity of food falling from the sky. The animation and action in the picture is very well executed and the set piece with Flint and the spaghetti tornado was quite the impressive feat. Also I must again tip my hat to the animators and filmmakers for maintaining a sense of subtlety to a number of bits a jokes that are brilliantly executed without being in your face and look at me. I just wish they could have used a bit of this same refrain with their characters and made them a bit more real to life. The film also moves bye with very few dull spots and drives through all the way to the end which is all one can hope for when it comes to a film, especially comedies.
In the end, Cloudy with a Chance of Meatballs is a successful adaptation and a fun little fantasy to enjoy. Fast paced and full of a number of clever jokes there is a lot here for viewers of all ages, while still a bit skewed towards the younger crowd. Hader does a great job in the lead as Flint but the characters are a bit to over the top to really fully embrace or not find annoying. There is plenty of imagination and a number of good gags to keep us entertained and is a solid animated picture in a year littered with greats.
Cloudy with a Chance of Meatballs is a B-

You can get Cloudy with a Chance of Meatballs on DVD

One thought on “Queue Review: Cloudy with a Chance of Meatballs”